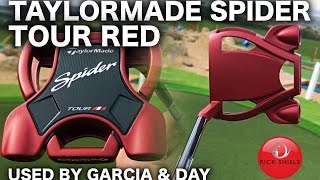 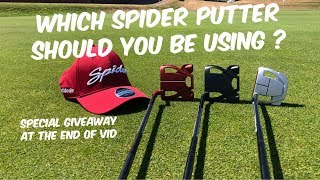 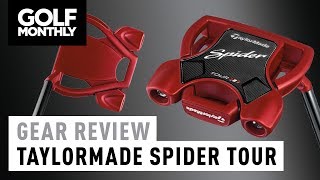 So goes the saying “golf is a game and games are meant to be fun.” Golf is certainly a lot more fun when you’re making putts and shooting lower scores, and that’s exactly what thousands of golfers are realizing with the Taylormade Spider putter. If you’re a player of any ability that is looking for more consistency on the greens from one of the most forgiving putters around, the Taylormade Spider is an investment you need to make.

Coming into 2017 Taylormade wasn’t exactly lighting it up in the putter market like they were with drivers and irons. That changed overnight when they introduced Spider family of putters. Inspired by the likes of Jason Day and Dustin Johnson, Spider putters were coveted overnight by the best players in the world and weekend warriors alike. It comes as little surprise that the Spider received a Gold Rating on the 2018 Golf Digest Hot List. If you’re a player looking for a forgiving putter with the most advanced design and technology, you can’t go wrong with the Spider putter.

When a new putter hits the market and becomes the most popular putter in PGA Tour events for 17 out of 18 weeks, there’s a reason why. That’s exactly what happened with the Taylormade Spider putter when it was first released in 2017 and its popularity hasn’t slowed down. The 2018 family welcomes a couple new models that feature improved technology and additional cosmetic options.

All Spider putters are built with an insert the utilizes Roll Groove Technology. The main feature of Roll Groove Technology is grooves that are angled downward at a 45-degree angle. The grooves flex at impact and impart 20 more RPM of forward roll on the ball than other putters on the market. This helps putts to stay on line and improves distance control.

Spider putters are strategically designed with 13 pieces put together in a way that spreads the majority of the weight to the perimeter of the putter head. The result is higher MOI and increased forgiveness on mishits.
While most mallet style putters are face balance, the Spider is available in a toe hang option as well. Face balance putters are ideal for people with square-to-square strokes. With up to 38 degrees of toe hang in the most toe balance model, the Spider gives players with arcing strokes the benefits of easy alignment and increased forgiveness that are sometimes lacking in blade style putters.

So goes the saying “golf is a game and games are meant to be fun.” Golf is certainly a lot more fun when you’re making putts and shooting lower scores, and that’s exactly what thousands of golfers are realizing with the Taylormade Spider putter. If you’re a player of any ability that is looking for more consistency on the greens from one of the most forgiving putters around, the Taylormade Spider is an investment you need to make.

The 2018 family of Spider models includes four different head designs (Spider Tour, Spider Interactive, Spider Arc, and Spider Mini). All Spider putters are available in right- and left-handed in lengths of 33”, 34”, and 35”. Loft ranges from 2.5 degrees to 3.5 degrees depending on the model and the standard lie angle is 70 degrees. Color combinations include variations of red, black, silver, and a multitude of custom options in the Spider Interactive model. For a complete list of model specific specs click here.

The Taylormade Spider line of putters have revolutionized putter design. Tour players, high handicappers, and players in between are shooting lower scores thanks to the Spider putter. It is safe to say that Taylormade has swept away the competition with putters just as it previously did with drivers.

How Does the Taylormade Spider Putter Compare?

The Odyssey Toe Up Putter is by far one of the most versatile putters available today. When Odyssey first introduced the Toe Up putter in 2016, no one knew anything about it until it showed up unannounced in the Odyssey merchandise booth at the PGA Merchandise Show. Meant to be a sidebar release with the White Hot Rx, the Toe Up putter was anything but. Designed with an emphasis on making the head easier to control throughout the stroke, the Top Up putter has received rave reviews. Available in two of Odyssey’s classic blade head designs (#1 and #9), the Toe Up putter is a great option for any player looking to reduce torque and strike putts more consistently.

The Ping Vault 2.0 Putter is one of the best putters available today. Over all the past 60 years , Ping has consistently been at the forefront of putter design and technology. That certainly remains the case with the new Ping Vault 2.0 line of putters. Building on the success of the original Vault Series of putters, the Vault 2.0 features several design improvements that make the latest model more versatile while still maintaining all the features that made the original Vault series so successful. If you’re a player looking for forgiveness and consistency from a solid milled-face putter, then you can’t go wrong with the Ping Vault 2.0 lineup.

The TaylorMade TP Ardmore Putter is one of the most talked about putters available today. When Jason Day had Taylormade make him a custom putter with a red finish that contrasted sharply with the white ball he ascended to the #1 world ranking. Red is now en vogue with putter design and the Taylormade TP Ardmore line of putters continues that trend. The family features several mallet head designs that make alignment easy and afford forgiveness across the entire face. It’s no surprise the TP Ardmore family of putters received a Gold Rating on the 2018 Golf Digest Hot List. If you’re a player looking for a putter that incites confidence and provides maximum forgiveness, then the Taylormade TP Ardmore putter should be in your bag.