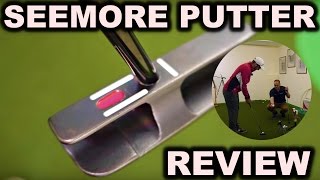 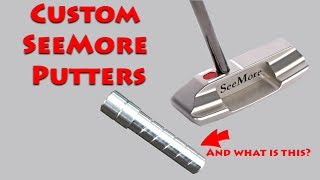 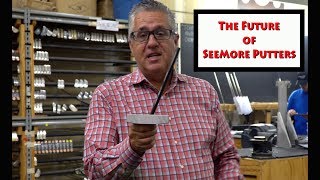 When the best players in the world have trusted a brand of putter for their entire career, it is for a reason. Seemore is that brand for major champions, top level amateurs, and weekend warriors alike. Utilizing RifleScope Alignment Technology and the finest materials available, the 2018 Nashville Studio line of putters is sure to deliver consistent performance for any player looking for flawless alignment and optimal feel on the green.

When Payne Stewart out-putted Phil Mickelson down the stretch to claim the 1999 US Open at Pinehurst there were fewer people happier than the founders of Seemore Putters. Since that fateful Father’s Day Seemore has remained a household name among boutique putter companies. That reputation continues in 2018 with the release of the Nashville Studio Series. Having received a Silver Rating on the 2018 Golf Digest Hot List, the Nashville Studio line features improved design features that make it one of the most reliable putters available. If you’re a new player that struggles with alignment or simply loves the feel and feedback of a milled face, there is a Seemore Nashville Studio putter for you.

Founded by California club professionals in 1998 with the simple goal of creating a putter that solved alignment problems for all golfers, Seemore is now recognized as one of the premier putter manufacturers in the world. Utilizing the finest materials and precise milling techniques, Seemore has continually maintained their reputation as a high-performing putter preferred by players of all levels.

RifleScope Alignment Technology has been a trademark of Seemore putters since the beginning. A distinct gun site allows players to use the black lower portion of the shaft to cover a single red dot on the heel of the top line. Two parallel white lines on either side of the red dot create a frame that highlights shaft giving the player added confidence that the head is square to the start line.

Putter manufacturers across the board use 303 stainless steel in the heads. Seemore, however, seeks out only the highest-grade 303 stainless steel made in the USA. Each block of steel is individually inspected prior to production meaning that any putter that goes to market meets the company’s rigorous standards. The end result in the 2018 Nashville line is a putter with one of the softest, most responsive feels around.

Eleven different head designs make the latest Nashville lineup of putters one of the most comprehensive lines Seemore has ever produced. With a variety of blade and mallet options, players can rest assured that there is an option that fits their stroke.

When the best players in the world have trusted a brand of putter for their entire career, it is for a reason. Seemore is that brand for major champions, top level amateurs, and weekend warriors alike. Utilizing RifleScope Alignment Technology and the finest materials available, the 2018 Nashville Studio line of putters is sure to deliver consistent performance for any player looking for flawless alignment and optimal feel on the green.

Seemore putters continue to be on the cutting edge of technology, design and performance. The Nashville Studio line incorporates tried and true alignment technology with the finest materials and milling techniques to produce a putter that is sure to make players of all levels more consistent on the green.

How Does the Seemore Nashville Studio Putter Compare?

The TaylorMade TP Mullen Putter has been one of the most talked about putters this year. When Taylormade introduced the TP Mullen line of putters in early 2017 they knew something big was on the horizon. Designed with input from the likes of Dustin Johnson, Jason Day, and Rory McIlroy, the six different models in the TP Mullen line incorporate the finest materials and modern design features, allowing a variety of options for all players. If you’re a player of any ability seeking a clean looking putter that is suitable to nearly any stroke, the TP Mullen line of putters are an excellent option.

The Ping Vault 2.0 Putter is one of the best putters available today. Over all the past 60 years , Ping has consistently been at the forefront of putter design and technology. That certainly remains the case with the new Ping Vault 2.0 line of putters. Building on the success of the original Vault Series of putters, the Vault 2.0 features several design improvements that make the latest model more versatile while still maintaining all the features that made the original Vault series so successful. If you’re a player looking for forgiveness and consistency from a solid milled-face putter, then you can’t go wrong with the Ping Vault 2.0 lineup.