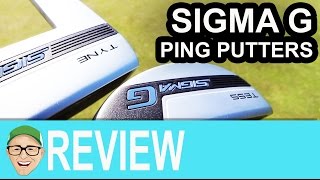 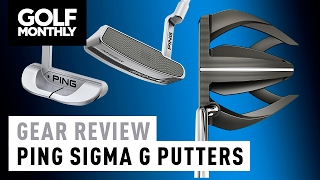 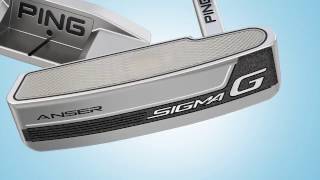 Putting is the most individualistic part of the game. Having a putter that not only fits properly but infuses confidence is essential to making more putts. That is exactly what the Ping Sigma G line of putters delivers. If you’re a player looking for a forgiving putter with an insert that provides the very best in feel and consistency, the Ping Sigma G needs to be in your bag.

Utilizing modern technology and materials, the Sigma G family of putters features a mix of traditional and modern head designs. If you’re a player looking for a high-performing insert that provides ultimate feel and forgiveness, the Ping Sigma G line of putters is sure to satisfy your needs.

The latest trend in putter design is to create an entire line of putters that have something for everyone. While most manufacturers fall far short of achieving this objective, Ping has exceeded expectations. With 18 unique head shapes and customizable options across the entire line, the Ping Sigma G series is hands-down the most customizable line of putters on the market today.

True Roll Face Technology is the result of years of testing and experimentation. Grooves that are deepest in the center of the face and become gradually shallower toward the heel and toe increase MOI and allow putts to travel the same distance regardless of where they are struck. The depths of all grooves (both in the center and perimeter of the head) are deeper than in previous designs; increasing friction at impact and getting the ball rolling more quickly.

The insert in the Sigma G line is made of PEBAX elastomer that sits on an anodized 6061 aluminum face. Players for whom sound and feel are important, the marriage of these two materials provides a soft, responsive feel without sacrificing the solid sound of a metal face. Because this insert covers the entire face, weight is moved away from the center toward the perimeter of the head creating a higher MOI for increased forgiveness and stability.

Utilizing their Fit For Stroke System, Ping tailored six heads for players with straight strokes, nine heads for slight-arc strokes, and three heads for strong-arc strokes. Within the Sigma G line head weights range from 340 grams to 400 grams and lie angle is also customizable four degrees up or down from standard. Some models are available in a counterbalance option and several different grips come stock as well.

Putting is the most individualistic part of the game. Having a putter that not only fits properly but infuses confidence is essential to making more putts. That is exactly what the Ping Sigma G line of putters delivers. If you’re a player looking for a forgiving putter with an insert that provides the very best in feel and consistency, the Ping Sigma G needs to be in your bag.

Head designs in the Sigma G line of putters come in a variety of blade, mallet, face balance, and toe hang options that are all customizable. The stock specs for all conventional putters are 35 inches in length, 70 degrees standard lie angle, 3 degrees of loft, and your choice of grip (Ping P60 Mid-Size, Ping PP62 Oversize, or Ping CB60 Counter-Balance). Some models are available in a counter balance design as well. All Sigma G putters are available in a Platinum or Black Nickel finish with a contrasting face. For a complete list of models and customizable options, click here.

The Ping Sigma G line of putters are everything a player could ask for in a family of putters. With classic and modern head designs that are tailored to specific strokes and the most advanced insert technology anywhere, the Ping Sigma G series provides consistent performance and forgiveness that is sure to be an asset for any player.

How Does the Ping Sigma G Putter Compare?

The Odyssey Toulon Putter is one of the coolest and most popular putters available. In 2018, the Odyssey Toulon line of putters expanded to nine distinct head designs with multiple variations of each model. Golf Digest gave both the blade and mallet head designs a Gold Rating in their 2018 Hot List. Utilizing the very best materials, technology and design, Toulon putters have been touted as the best on the market with comparisons made to the likes of Scotty Cameron. If you’re a player of any ability looking for a customizable putter with cutting-edge technology and design, you won’t find anything better than a putter from the Odyssey Toulon line.

The Odyssey O-Works Putter is one of the hottest putters on the market. Building on the success of the O-Works line released in 2017, Odyssey has released the O-Works Black line along with six new models in the O-Works Red line in 2018. O-Works putters have long been the #1 putter on tours worldwide and the newest members of the O-Works family are already proving their mettle with multiple wins around the globe. Utilizing cutting edge technology in classic head designs that have stood the test of time, the new Black and Red models received Gold Ratings on the 2018 Golf Digest Hot List for both mallet and blade putters. If you’re a player of any skill level that has used one of Odyssey’s iconic heads in the past or is simply looking for consistent performance and feel on the greens, the Odyssey O-Works Putter is the club for you.

The Cleveland TFI 2135 Putter is one of the most beautifully crafted putters today. When Cleveland introduced the latest version of the TFI 2135 in 2017 they knew they were on to something. Still touting the cutting-edge sightline found in previous models, the latest TFI 2135 Satin line incorporates new materials and technology making it one of the most well-built and functional putters on the market. Golf Digest gave the TFI 2135 Satin line a Silver Rating on their 2017 Hot List. With five different head designs, this latest line of putters gives players a multitude of options when choosing the best putter for them. Players of all abilities can benefit from design features and technology in the TFI 2135 putter line to make more putts.

Amazon.com
$124.99
Best Deal
Last Amazon price update was: June 28, 2022 4:56 pm
× Product prices and availability are accurate as of the date/time indicated and are subject to change. Any price and availability information displayed on Amazon.com (Amazon.in, Amazon.co.uk, Amazon.de, etc) at the time of purchase will apply to the purchase of this product.