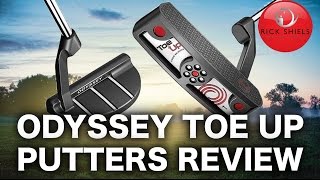 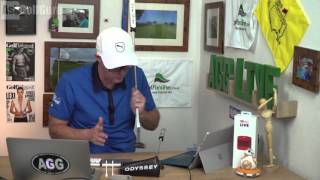 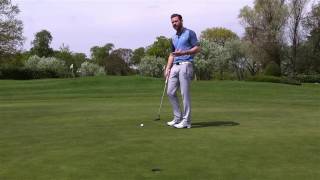 Delivering the face square to the line at impact is the most essential fundamental in putting. Innovative design features that are proven to reduce face rotation throughout the entire stroke make the Toe Up putter unlike anything in its class. If you’re a player of any ability that struggles with keeping the face square and starting the ball on line, the Toe Up putter should be in your bag.

When Odyssey introduced the Toe Up putter in 2016, no one knew anything about it until it showed up unannounced in the Odyssey merchandise booth at the PGA Merchandise Show. Meant to be a sidebar release with the White Hot Rx, the Toe Up putter was anything but. Designed with an emphasis on making the head easier to control throughout the stroke, the Top Up putter has received rave reviews. Available in two of Odyssey’s classic blade head designs (#1 and #9), the Toe Up putter is a great option for any player looking to reduce torque and strike putts more consistently.

Odyssey has never been afraid to think outside the box when it comes to putter design. When they decided to use the cover of the Callaway Rule 35 golf ball as an insert for the White Hot putter nearly 20 years ago, their competitors thought they were crazy. No one would guess that the original White Hot would become one of the most iconic putters in history. Odyssey has kept that innovative spirit alive with the Toe Putter that defies modern putter design on a number of levels.

Stroke Balanced Technology is proven to reduce torque through impact and consistently deliver the face to a square position at impact. While most modern putter designs move the center of gravity back in the clubhead through perimeter weighting, it is centered directly behind the face in the Toe Up putters. The end result is a face that balances toe up, unlike any other putter on the market.

The hosel in the Toe Up putter has also been modified so that the shaft axis sits directly in line with the center of gravity. This provides stability throughout the entire shaft to further reduce torque during the stroke.
Due to the fact that the center of gravity sits so far forward in the Toe Up putters, the face does not have an insert, which is a feature of many other Odyssey putters. In order to keep the weight balanced throughout the head the face is milled with a chemically etched oval pattern that increases contact points with the ball at impact to promote forward roll and start putts on line.

Delivering the face square to the line at impact is the most essential fundamental in putting. Innovative design features that are proven to reduce face rotation throughout the entire stroke make the Toe Up putter unlike anything in its class. If you’re a player of any ability that struggles with keeping the face square and starting the ball on line, the Toe Up putter should be in your bag.

The Toe Up putter comes in either the classic #1 or #9 blade head in both right- and left-handed. Standard lengths are 33”, 34”, or 35”. Lie is 70 degrees and loft is three degrees. The head weight for both putters is 355 grams. The face balance is toe up. The stock grip is the Superstroke Flatso 1.0.

Most putter manufacturers have worked to reduce torque in the putting stroke through the implementation of counter balancing and perimeter weighting. While these methods have worked to some extent, no company has reduced torque in the manner that Odyessey has with the Toe Up putter. Though met with skepticism upon its initial release, the Toe Up putter now speaks for itself and is a mainstay in the marketplace.

How Does the Odyssey Toe Up Putter Compare?

The Seemore Nashville Putter has been one of the most popular putters used on the tour, ever since since Zach Johnson won the 2015 British Open Championship. Seemore Putters have always been on the cutting edge of technology, design and performance. Their new Nashville Studio line incorporates tried and true alignment technology with the finest materials and milling techniques to produce a putter that is sure to make players of all levels more consistent on the green. Having received a Silver Rating on the 2018 Golf Digest Hot List, the Nashville Studio line features improved design features that make it one of the most reliable putters available. If you’re a player that struggles with alignment or simply loves the feel and feedback of a milled face, there is a Seemore Nashville Studio putter for you.

The TaylorMade TP Mullen Putter has been one of the most talked about putters this year. When Taylormade introduced the TP Mullen line of putters in early 2017 they knew something big was on the horizon. Designed with input from the likes of Dustin Johnson, Jason Day, and Rory McIlroy, the six different models in the TP Mullen line incorporate the finest materials and modern design features, allowing a variety of options for all players. If you’re a player of any ability seeking a clean looking putter that is suitable to nearly any stroke, the TP Mullen line of putters are an excellent option.