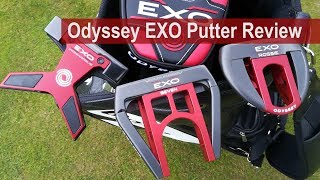 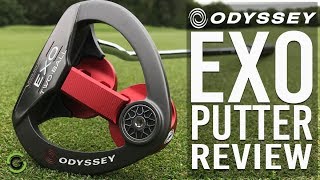 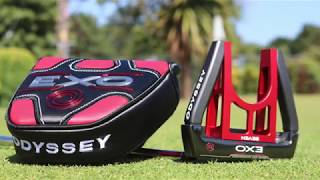 Making more putts is the key to shooting lower scores for any player. Having a putter that gets the ball rolling on-line quickly and provides maximum forgiveness is central to more consistency and fewer strokes on the green. If you’re a player used to a mallet head shape looking for increased feel and consistency, you can’t go wrong with the Odyssey EXO.

Odyssey has been a top putter manufacturer since long before Tiger won his first Masters in 1997. Built on a reputation of making putters with the latest in design and technology, Odyssey’s new EXO line of putters is certainly no exception.

Released in May 2018, the EXO putters received a Gold rating and 4.5 stars on the 2018 Golf Digest Hot List. In the EXO, Odyssey has implemented technologies from older putters to both optimize feel and create consistent roll off the face. If you’re a player looking for a mallet putter with maximum forgiveness and a soft face for consistent feel and control, the Odyssey EXO putter should be in your bag.

Odyssey has long led the way in putter design and technology and continues to do so with the EXO. For players with arching strokes or that prefer a mallet head, the EXO brings two former Odyssey technologies together in one putter that is not only modern, but noticeably consistent and forgiving.

The White Hot Microhinge insert in the EXO combines White Hot Insert Technology from the early 2000s with Microhinge Technology from the O-Works putter series of 2017 to create Odyessey’s most optimally performing face to date. While some players have complained that the original White Hot insert was too soft, the White Hot insert in the EXO is slightly firmer giving players increased feel and enhanced sound feedback upon impact. Microhinge Technology helps to get the ball rolling more quickly than other putters. By reducing the number of contact points with the ball at impact, the skidding effect is greatly reduced, helping putts to stay on-line and roll true.

The head construction in the EXO utilizes different materials, strategically placed throughout the head to optimize stability and increase MOI for maximum forgiveness. The black material on the perimeter of the head is heavier 17-4 stainless steel while the red center sections are made of 6061 milled aluminum which is 1/3 lighter. By keeping the majority of the weight on the outside of the head, the EXO delivers maximum forgiveness across the entire face.

The Indianapolis, Rossie, and Seven mallet head models are all derived from previously popular Odyssey head designs and allow players a variety of options. Each model is also available in either a toe-hang of face balance option allowing players to further match a putter to their stroke.

Making more putts is the key to shooting lower scores for any player. Having a putter that gets the ball rolling on-line quickly and provides maximum forgiveness is central to more consistency and fewer strokes on the green. If you’re a player used to a mallet head shape looking for increased feel and consistency, you can’t go wrong with the Odyssey EXO.

All EXO Putters comes in right- and left-handed with lengths ranging from 32 to 37 inches in 0.5 inch increments. The lie angle can be customized up to three degrees flat or upright from the standard 70 degrees and loft is 3 degrees in all models. The steel shaft comes stock from Odyssey and players may choose from either Winn Works Tour EXO grip or SuperStroke Tour EXO Mid Slim 2.0 grip.

The Odyssey EXO putter is unquestionably one of the most forgiving putters on the market. Through marrying two proven technologies into a modern face design, golfers are afforded optimal feel and consistent roll even on mis-hits. The use of different materials strategically placed in the head allows for greater forgiveness and overall consistency.

How Does the Odyssey EXO Putter Compare?

The Rife Switchback Putter is by far one of the most popular putters of 2018 and it is easy to see why. When Rife Golf was founded in 2004, the founders set out with a simple mission to create putters that helped golfers of all levels putt better and become more consistent. That mission has continued through to today with the latest release of the Rife Switchback line of putters. With patented Roll Groove Technology, the 2018 Switchback series of putters incorporate all the technology that has made Rife putters great with a number of innovative improvements. If you’re a golfer of any level looking for more consistency on the greens, then the Rife Switchback is right for you.

The Cure CX1 Putter is a phenomenal putter, and is perfect for any player looking to sink more puts when on the green. When Cure first introduced its CX1 putter in 2016, it was not only a massive success, but it also received the Silver rating on Golf Digest’s Hot List. Since then, Cure has kept the look the same but made significant advancements to improve feel at impact. Players from the professional ranks to the weekend club golfer have widely embraced the CX1 for its state-of-the-art construction, design, and consistency. If you’re a player looking for the very best in putter design and performance, then the CX1 may be the club for you.

The Bettinardi BB1 Putter is unsurpassed in both design and materials. Super-Fly face milling affords players tremendous feel and feedback and the muted sound does not sound clicky or hard at all. Having received the Gold Rating on the 2018 Golf Digest Hot List, the BB1 is one of the most carefully crafted putters on the market today. Taking on a classic Anser-style look, the BB1 definitely falls in the high-end category of putters. If you’re an average to advanced player looking for optimal feel and feedback, the Bettinardi BB1 is the putter for you.

Amazon.com
$299.99
Best Deal
Last Amazon price update was: August 10, 2022 3:54 pm
× Product prices and availability are accurate as of the date/time indicated and are subject to change. Any price and availability information displayed on Amazon.com (Amazon.in, Amazon.co.uk, Amazon.de, etc) at the time of purchase will apply to the purchase of this product.