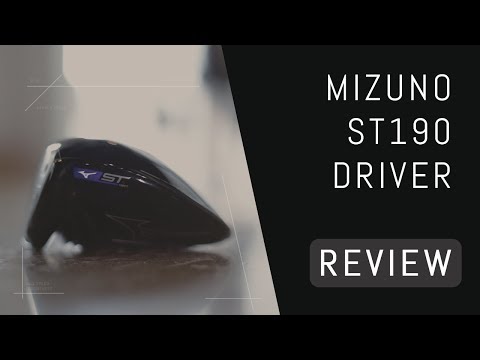 At Golfers Authority it is our responsibility to deliver readers honest reviews and recommendations. This is the first year that I would feel comfortable recommending the driver from Mizuno to golfers of any level. The ST190 is a perfect blend of technology and classic aesthetics and delivers golfers maximized performance. If you are a player looking to get your shaft of choice dialed in Mizuno is difficult to find but the ST190 is worth your patience. If you are in the market for a new driver and love classic looks, traditional sounds, and more distance, the ST190 is a must try.

Mizuno is known for its breathtaking irons and pristine wedges. The introduction of the ST190 line of metal woods has the entire golf community buzzing about the first complete driver offering from Mizuno. The ST190 incorporates every bit of technology Mizuno has accumulated over its history and delivers golfers more ball speed and more distance. A departure from the traditional blue that has been the signature of Mizuno Golf for many years, the ST190’s all black aesthetics introduce golfers to the Dark Art of Distance.

The Mizuno ST190 is one of very few drivers that delivers a forged face for improved sound, feedback, and speed. The face is constructed using strong SP700 Ti fibers combined with lighter CORTECH structures to give players maximum ball speeds and distance across a larger area of the club face.

The ST190 driver is the perfect blend of powerful distance and pleasing acoustics thanks to the harmonic impact technology and the amplified wave sole. These two architectural designs complement each other to provide precise player feel and feedback while retaining ball speeds as strikes move lower in the club head. The ST190 driver has a rear weight port that is factory installed to give players maximum moments of inertia and increased forgiveness.

Having never been a fan of Mizuno drivers in the past my expectations were not very high for the ST190. As soon as I got it into my hands, I was instantly proven very wrong. The all-black look is stunning, and the shape is confidence inspiring. After hitting just a few balls with the new driver I was completely rethinking my position on Mizuno. Unequivocally, I can say that this is Mizuno’s best driver ever. Having already won on the PGA Tour, the ST190 is the first Mizuno driver to win on Tour in 19 years. Players that have overlooked or never tried a Mizuno driver need to be putting the ST190 at the top of their list.

The ST190 was an easy drive for me to be comfortable with. Mizuno didn’t have many shafts for me the day of my testing, so I stuck with a stock offering of the Fujikura Atmos Black in the 70X version. This shaft was something new for me, but it was pleasant, and the combination was well suited for my swing.
During my fitting, I was hitting the ST190 in a standard 9.5-degree head. I loved the look, sound, and performance I was seeing from the Mizuno offering and have a newfound perspective for its entire line of products, not just its irons.

At Golfers Authority it is our responsibility to deliver readers honest reviews and recommendations. This is the first year that I would feel comfortable recommending the driver from Mizuno to golfers of any level. The ST190 is a perfect blend of technology and classic aesthetics and delivers golfers maximized performance. If you are a player looking to get your shaft of choice dialed in Mizuno is difficult to find but the ST190 is worth your patience. If you are in the market for a new driver and love classic looks, traditional sounds, and more distance, the ST190 is a must try.

The Mizuno ST190 comes standard in two head lofts, 9.5 and 10.5 degrees. Each club head is 460 cubic centimeters for maximum head size and forgiveness. Each version comes with an adjustable hosel that allows up to 3 degrees of loft in both directions.

One of the hesitations that I have with the Mizuno drivers is finding a variety of shafts for different golfers. The stock offerings for the ST190 are limited to the Atmos Red in 50-gram amateur and regular flexes and the Atmos Blue in 50-gram stiff. In order to get heavier or stiffer shafts players must order through local pro shops, online retails, or custom order shops. The grip that accompanies the ST190 is a proprietary offering exclusive to Mizuno but can be swapped readily for your grip of choice.

The ST190 driver is by far the most complete driver ever made by Mizuno. This is its first driver model that I would have full confidence in playing. The ST190 will rival any driver in looks and sound and is adjustable enough to fit most golfers. One advantage of the ST190 over many other drivers is the price. At $400, the ST190 is more affordable new than other company’s offerings without sacrifices in performance. If you are a new golfer or a player that has never tried Mizuno before, the ST190 is a comprehensive package.

How Does the ST190 Driver Compare?

The Callaway Epic Flash Driver is the most forgiving driver in Callaway’s newest lineup. The Epic Flash uses artificial intelligence to deliver a club face that is perfectly optimized to deliver maximum ball speeds from everywhere across the hitting area. Jailbreak is retained to reduce the flexing of the face and deliver more ball speed through better energy transfer. The Epic Flash is one of the best drivers ever created and can help players of all abilities hit longer, straighter golf shots.

The TaylorMade M6 Driver has been injected to ensure that every driver produced is at the maximum limit for speed. Twist Face has been combined with an Inertia Generator to give players more forgiveness and more accuracy from off-center strikes. The M6 combines low and rear weighting to give players more launch, more distance, and higher moments of inertia. The carbon crown and Hammerhead 2.0 technology make the M6 easy to align and faster for everyone.

The Cobra F9 Driver is Cobra’s fastest driver ever. The use of SPEEDBACK weight distribution gives players better aerodynamics from a lower center of gravity. The CNC milled face is five times more precise than hand-polished driver faces and delivers a thinner, faster club face. Everything inside and outside of the F9 driver is built to give players better swing speeds, more ball speed, and greater distances. The movable weights and carbon crown help engineers and players dial in their ideal center of gravity for perfect launch and spin rates. Cobra is making a play for the bags of every golfer this season with the introduction of SPEEDBACK and the F9 driver.