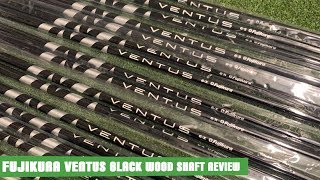 The Fujikura Ventus Black utilizes a Tour-inspired profile and the first to include Fujikura’s all new VeloCore Technology in an accelerated taper, ultra stiff tip profile. Maximum energy transfer from the tip section boosts the clubhead’s performance and a straight taper design enhances loading and feel. You can purchase the Fujikura Ventus Black in the following models: 6, 7, and 8.

Best deal at: Amazon.com
Buy for best price
Amazon.com
$350.00
SEE IT
Walmart Affiliate Program
$350.00
SEE IT
Last Amazon price update was: February 7, 2023 4:36 am
× Product prices and availability are accurate as of the date/time indicated and are subject to change. Any price and availability information displayed on Amazon.com (Amazon.in, Amazon.co.uk, Amazon.de, etc) at the time of purchase will apply to the purchase of this product.
Fujikura Ventus Black Golf Shaft

For many golfers, Fujikura golf shafts have become the go-to favorite for high performance. The Ventus series specifically is on pace to become one of Fujikura’s most successful models ever. The Ventus Black is the lowest launching, most tip stiff version within the Ventus line and we put it to the test to see how much distance and forgiveness we could get using the Velocore technology.

Where to Buy
Amazon.com
$350.00
SEE IT
Walmart Affiliate Program
$350.00
SEE IT
Last Amazon price update was: February 7, 2023 4:36 am
× Product prices and availability are accurate as of the date/time indicated and are subject to change. Any price and availability information displayed on Amazon.com (Amazon.in, Amazon.co.uk, Amazon.de, etc) at the time of purchase will apply to the purchase of this product.

Who Should Buy The Fujikura Ventus Black Golf Shaft?

Ventus Black is made for high swing speed players looking to firm up the response of their golf shaft for more distance and control. The Velocore technology in the Ventus Black shaft enhances MOI and can lead to even more forgiveness, regardless of what driver you swing. Ultimately, the Ventus Black is a premium, aftermarket golf shaft that will be coveted by serious golfers and players that do not want to leave anything to chance.

Ventus Black is packed with material advantages. Firstly, Velocore is used to increase the shaft’s stability during the golf swing to improve clubhead impact performance, especially on mishits. Rather than using T1100 as most companies have, Fujikura created the Ventus Black with a combination approach of 70 ton and 40 ton pitch carbon fiber to enhance strength but retain a smoother feel. The result is a golf shaft with explosive performance that is easier to swing at all club head speeds.

Ventus has been a shaft range that seems to outperform its competition since its release. Ventus Blue – the original Ventus – is an excellent golf shaft. Ventus Black however, fit me to a tee. Ventus Black began as a prototype for Dustin Johnson, and while I am no professional golfers, my swing often is well suited by low launch, low spin profiles like the Ventus Black in my driver and 3 wood. The defining factor for me was how much control I seemed to gain from Ventus Black. Everything seemed to end up closer to target even on my worse swings. It’s difficult to say definitively, but Velocore seems to be 100% making a difference in the overall forgiveness of my clubs and I’m sure many of you would find similar results.

Unmistakably, Fujikura’s Ventus Black is one of the best low launch, low spin golf shaft ever. If it fits your exact swing or not is something you will have to test to find out. Overall, Ventus Black can provide more distance and more forgiveness in almost any driver and fairway club head. Velocore is a technology that translates to immediate results especially for player confidence and finding the fairway under pressure. The addition of Ventus Black and Red to the original Ventus Blue allows golfers to find their ideal fit for performance and feel. Ventus Black has already become a staple on professional golf tours, and it is clear why.