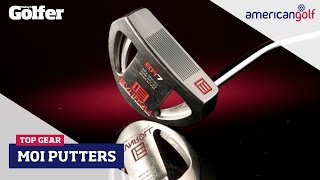 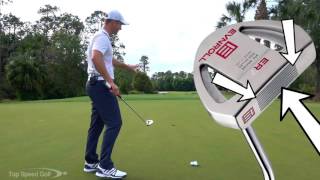 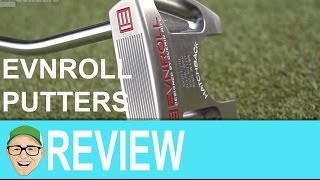 Hitting putts solidly is something that almost all golfers struggle to do consistently. Mishit putts often end up off line and short of the hole costing golfers valuable strokes. The technology in the Envroll ER7 makes it one of the most forgiving putters on the market allowing players to make more putts and shoot lower scores. If you are a player looking for increased forgiveness and a more consistent roll off the face, the Envroll ER7 should be in your bag.

pgatoursuperstore.com
$359.99
Best Deal
Add to wishlistAdded to wishlistRemoved from wishlist 0
Last updated on June 30, 2022 2:02 am

When Guerin Rife and Stephen Riley came together at the PGA Merchandise Show in 2015, they had over 50 years of combined experience in the golf industry. Little did they know, their meeting would lead to the founding of Envroll Putters. Introduced in 2017, the Envroll ER7 received a Silver Rating on the Golf Digest Hot List.

The technology in this mallet shaped putter is what really sets it apart from other mallet putters on the market. If you’re a player looking for increased forgiveness and consistency on the greens, there might not be a better choice than the Envroll ER7.

Geurin Rife was originally the founder of Rife Putters and was able to bring his knowledge and scientific understanding of putting dynamics to the table when he founded Envroll. Through advanced testing and engineering, Rife and Riley and were able to come up with one of the most technologically advanced and forgiving putters on the market with the ER7.

Sweet Face Technology incorporates grooves that are narrower in the center of the face and wider toward the toe and heel. This design creates a progressive energy transfer at impact that allows putts struck up to 3/4 inch off-center to travel the same distance as putts struck on the center of the face. Milled from 303 stainless steel, the face is similar to that of a wood in that it is slightly curved inward on the heel and toe to help mishit putts stay on line.

While the majority of manufacturers have touted thinner faces for increased distance, trajectory, and overall performance for years, Cobra has actually gone the opposite direction with the King Black wedge which features the thickest face of any wedge on the market. Though previous Cobra wedges have featured thicker faces for increased feel, the King Black has moved the thickest part of the face slightly higher on the face to reduce vibration on mishits and provide greater feedback on solid shots.
While some putters on the market have weight centered behind the center of the face, the weight in the back of the head in the ER7 is distributed toward the perimeter. Through equally distributing the weight in the back of the head, face manipulation is greatly reduced allowing putts to track on line for greater stability and a more consistent roll.

Though most putters have a single sightline, the ER7 features three distinct white sightlines making it incredibly easy to line up. Additionally, the connection of three parallel steps on either side of the center cavity toward the back of the head give the ER7 a look of motion to the target that infuses confidence at setup.

Hitting putts solidly is something that almost all golfers struggle to do consistently. Mishit putts often end up off line and short of the hole costing golfers valuable strokes. The technology in the Envroll ER7 makes it one of the most forgiving putters on the market allowing players to make more putts and shoot lower scores. If you are a player looking for increased forgiveness and a more consistent roll off the face, the Envroll ER7 should be in your bag.

The ER7 is unquestionably one of the most technologically advanced putters around. Featuring Sweet Face Technology, the head design is unlike anything else on the market and is proven to perform consistently on both solid putts and mishits.

How Does the Envroll ER7 Putter Compare?

The Odyssey EXO White Hot Putter is by far one of the hottest putters of 2018 and it is easy to see why. Through marrying two proven technologies into a modern face design, golfers are afforded optimal feel and consistent roll even on mis-hits. The use of different materials strategically placed in the head allows for greater forgiveness and overall consistency allowing players to make putts with ease. Released in May 2018, the EXO putters received a Gold rating and 4.5 stars on the 2018 Golf Digest Hot List. In the EXO, Odyssey has implemented technologies from older putters to both optimize feel and create consistent roll off the face. If you’re a player looking for a mallet putter with maximum forgiveness and a soft face for consistent feel and control, the Odyssey EXO putter is the club for you.

globalgolf.com
$349.99
Best Deal
Last Amazon price update was: June 30, 2022 12:15 am
× Product prices and availability are accurate as of the date/time indicated and are subject to change. Any price and availability information displayed on Amazon.com (Amazon.in, Amazon.co.uk, Amazon.de, etc) at the time of purchase will apply to the purchase of this product.

The Rife Switchback Putter is by far one of the most popular putters of 2018 and it is easy to see why. When Rife Golf was founded in 2004, the founders set out with a simple mission to create putters that helped golfers of all levels putt better and become more consistent. That mission has continued through to today with the latest release of the Rife Switchback line of putters. With patented Roll Groove Technology, the 2018 Switchback series of putters incorporate all the technology that has made Rife putters great with a number of innovative improvements. If you’re a golfer of any level looking for more consistency on the greens, then the Rife Switchback is right for you.

The Cure CX1 Putter is a phenomenal putter, and is perfect for any player looking to sink more puts when on the green. When Cure first introduced its CX1 putter in 2016, it was not only a massive success, but it also received the Silver rating on Golf Digest’s Hot List. Since then, Cure has kept the look the same but made significant advancements to improve feel at impact. Players from the professional ranks to the weekend club golfer have widely embraced the CX1 for its state-of-the-art construction, design, and consistency. If you’re a player looking for the very best in putter design and performance, then the CX1 may be the club for you.