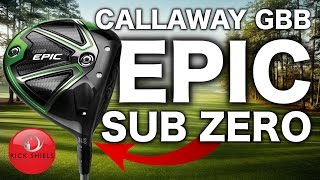 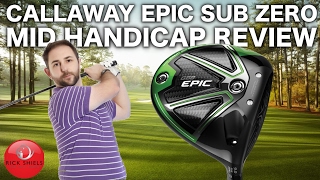 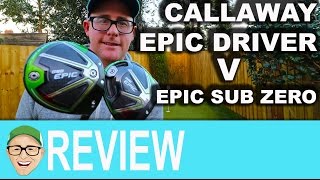 The Callaway Epic Sub Zero Driver was one of the most successful drivers of 2017, and it is perfect for the mid to high handicap golfer looking for more forgiveness, accuracy, and distance when on the when on the tee box.

globalgolf.com
$474.99
Best Deal
Add to wishlistAdded to wishlistRemoved from wishlist 0
Last updated on January 6, 2020 8:37 am

See the all new Epic line has two models, the “standard” which is the Epic, and the Sub Zero, which was specifically designed for golfers who create a lot of spin. See low spin drivers have historically been smaller in volume, have a lower moment of inertia, and are fade biased. These types of clubs were specifically designed for low handicap players with a higher swing speed. The new Callaway Epic Sub Zero Driver breaks this trend and is different, by that it gives the player the best of both worlds. The Callaway Epic Sub Zero Driver incorporates both the Jailbreak and Exo-Cage technology found in the Epic Driver, which gives players more distance and speed, while moving the center of gravity on the club to the neutral line “hence the name Sub Zero”. By moving the center of gravity to the zero line, the Callaway Epic Sub Zero generates the same moment of inertia as the standard Epic but creates about 500 RPM less, thereby making it easier for amateur players to use the club.

Since it was first released in early 2017, the Cobra Sub Zero Driver has not only received the highest rating of Gold in the 2017 Golf Digest Hot list, but it has also become one of the most recognized clubs used on the tour. This mainly has to do with Callaway’s new Jailbreak Technology which solves the problem of the crown and sole separating as the club face is stretched vertically at impact. This separation results in a loss of energy transferring to the ball. So, does the Jailbreak Technology work, yes absolutely, and is why the Callaway Epic Sub Zero Driver is perfect for the mid to high handicap golfer looking to have better control of the ball, less spin, and overall improve their accuracy when on the tee box.

The Callaway Epic Sub Zero Driver also incorporates the impressive Exo Cage Construction. This construction allows for Callaway to integrate more carbon fiber into the design of the clubhead, which helps the Jailbreak Technology to really shine through.

Where the standard Callaway Epic Driver and the Sub Zero are vastly different is in its weight system. The Callaway Epic Sub Zero Driver does not have the same perimeter weighting track as the standard Epic model, rather it has two weight ports that exist in the front and back of the sole. Through the use of a 2 and 12 gram weight “screw” that comes standard with the Callaway Epic Sub Zero Driver, players can move the center of gravity of the club forward to reduce spin or rearward to improve consistency.

The Callaway Epic Sub Zero Driver was one of the most successful drivers of 2017, and it is perfect for the mid to high handicap golfer looking for more forgiveness, accuracy, and distance when on the when on the tee box.

As what has become their standard, Callaway offers a variety of stock shafts with the Callaway Epic Driver. Players can choose from the Fujikura Pro (available at 70 grams), Aldila Rogue (available in 60 and 70 grams), and the Project X HZRDUS T800 (available at 50 grams). There are also a variety of flexes that you can chose from, including Light, Regular, Stiff, and Extra Stiff.

How Does the Callaway Epic Sub Zero Driver Compare?

The Srixon Z545 Driver is one of the longest and most versatile drivers available today. In 2015, Golf Digest awarded the Srixon Z545 with a Silver rating on its annual Hot List. Some of the best players in the world, including 2011 PGA Champion Keegan Bradley, trust Srixon golf equipment to produce their best results, and if it can help them, it can help you too. The Srixon Z545 Driver is ideal for the player looking for amazingly long distance with the capability of fine tuning without going to a golf shop. The Quick Tune System on the hosel is unique for a driver, allowing golfers to adjust the lie and face angle at address. Although you cannot adjust the loft, this is still an incredible feature especially being able to change the face angle from neutral to open or closed, depending on your shot shape tendencies or preferences. If you are looking for a driver that provides the very best in distance, adjustability, and forgiveness, regardless of a player’s handicap or skill level, then this is the club for you.

Amazon.com
$349.99
Best Deal
Last Amazon price update was: August 10, 2022 4:19 pm
× Product prices and availability are accurate as of the date/time indicated and are subject to change. Any price and availability information displayed on Amazon.com (Amazon.in, Amazon.co.uk, Amazon.de, etc) at the time of purchase will apply to the purchase of this product.

Amazon.com
$199.00
Best Deal
Last Amazon price update was: August 10, 2022 5:29 pm
× Product prices and availability are accurate as of the date/time indicated and are subject to change. Any price and availability information displayed on Amazon.com (Amazon.in, Amazon.co.uk, Amazon.de, etc) at the time of purchase will apply to the purchase of this product.